Accelerated freefall (AFF) is a method of skydiving training. This method of skydiving training is called “accelerated” because the progression is the fastest way to experience solo freefall, normally from 3000 meters “Above Ground Level” (AGL). In static line progression, more jumps are required to experience freefall, but the jumps are less expensive for the student as one instructor can dispatch multiple students per load and students are initially dispatched from lower altitudes. Under accelerated freefall, one or sometimes two instructors are dedicated just to one student. 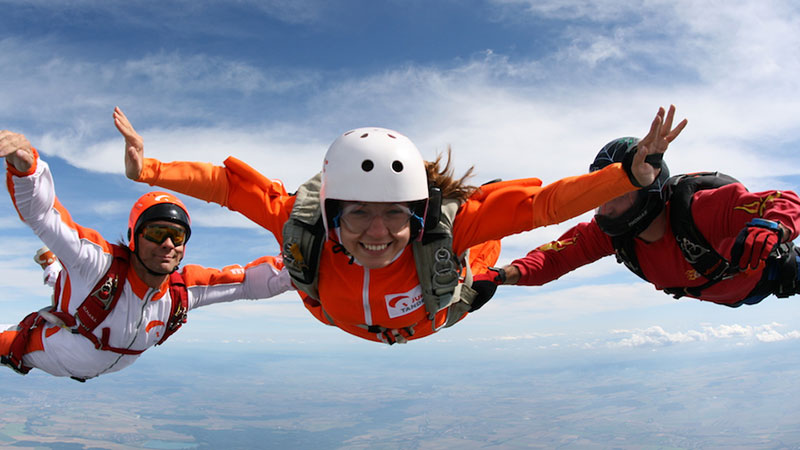 Once the student has proven they can deploy their own parachute on the first few jumps, the student will be released on subsequent levels and will have the opportunity to prove to their instructors that they have the basic flying skills required to manoeuvre in free fall without assistance. Each AFF level including and after level three is called a ‘release dive’. This means that the student is briefed by the instructor that at a certain point in the free fall, the student will be released, although the instructor aims to remain nearby to assist in safety and teaching. On release skydives there is a possibility the instructor may not be able to dock and assist at pull time, so it is important that the student has already learned the skills required to activate their parachute at the safe altitude and in the right way. For this reason, students may not progress to the next level of AFF until they have completed all the targeted learning objectives of the previous level.

Instructors on all AFF levels have a hard deck where they must pull their own parachute and save their own life. If they have not been able to assist their student by this altitude, the student’s rig is equipped with an “Automatic Activation Device (AAD)” that will fire the reserve parachute if the student passes the activation altitude at freefall speeds. While it is extremely rare that a student will have an AAD activation, this final level of protection protects the student as much as possible from the consequences of being out of control or not being able to deploy their own parachute.

The instructor(s) determine when the student has passed the requirements or “Targeted Learning Objectives (TLOs)” for each level. During the AFF jumps, the student may have radio contact with ground personnel who direct the student’s maneuvers under their parachute, however the student must have the skills for a solo landing in case the radio fails.